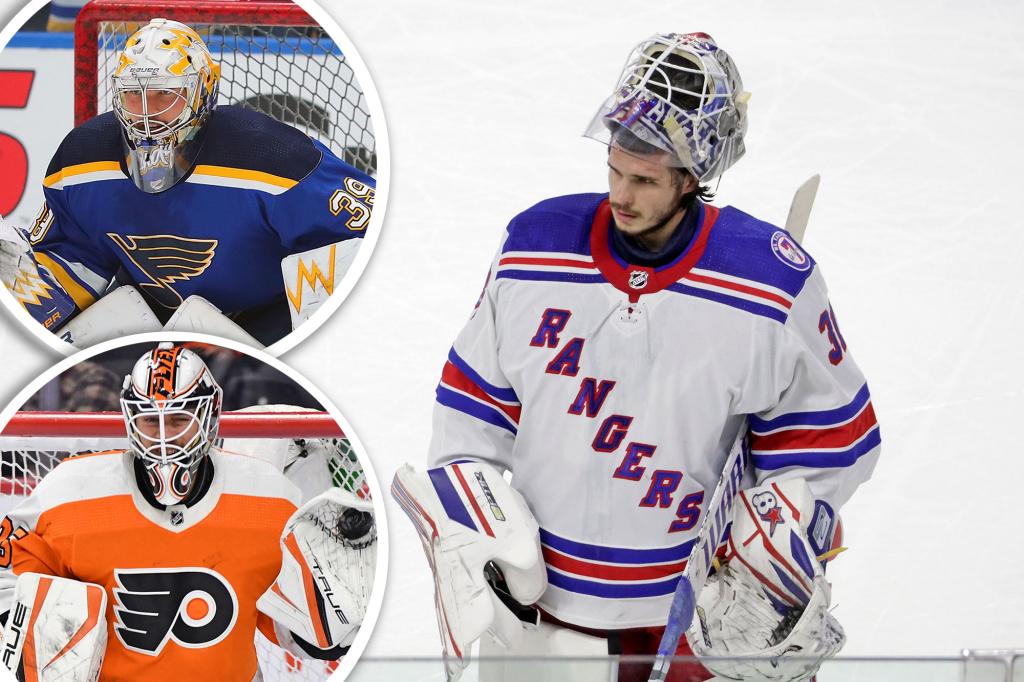 Alexandar Georgiev would have been conspicuous by his absence at the Rangers’ breakup day last week, but there isn’t much suspense to his situation.

Georgiev, a restricted free agent-to-be, has made no secret that he wants more playing time than the Rangers can give him. Though the Blueshirts hung onto him during the season, in which he played 33 games with a .898 save percentage, the offseason gives general manager Chris Drury a chance to find another backup for Igor Shesterkin who might embrace the role.

Whether the 2022-23 season looks more like the 52-30 starting split that Shesterkin and Georgiev had this year or Shesterkin takes a larger slice of the workload is yet to be seen. Shesterkin frequently joked that he was surprised at how much he played, and the 72 starts he finished the season with, including playoffs, blew away his previous career high. But he was effective right up until the end.

The Rangers were paying Georgiev $2.425 million AAV, though if they can get away with paying his replacement less, that would be ideal given their cap crunch elsewhere on the roster.

The market for backup goaltenders is, well, what you would expect for that position. Just fine. Here’s a look at some of the Rangers’ options if they choose to go after a free agent.

Likely the best backup out there this summer, DeSmith has done a nice job behind Tristan Jarry and Matt Murray for four years and had a .914 save percentage last season. He is coming off core muscle surgery after an injury suffered in Game 1 of the playoffs against the Rangers but, if healthy, figures to be an agreeable option behind Shesterkin, and his last deal carried just a $1.25 million cap hit.

Jones, 32, is essentially a replacement-level goaltender at this point, with a save percentage that was astoundingly .896 on the nose for three straight seasons before rising to .900 with the Flyers last year. That’s a hair better than what Georgiev gave the Rangers, and Jones’ playoff experience — he’s been to two Stanley Cup Finals and won one — could serve the Blueshirts well in springtime.

The former Islander is coming off a rough season with the Red Wings, in which his save percentage dipped to a career low .891 over 31 games. But he’s had success in New York before, and if Shesterkin is ready to take on a heavier workload, playing fewer games could help Greiss be more effective. He would presumably need to agree to a pay cut from the $3.6 million AAV his last contract carried, but it’s hard to see any team agreeing to give that to the 36-year-old.

There’s an obvious appeal here: Charlie is the brother of Ryan Lindgren, and it feels a safe assumption that the two would love to play together in New York. Though he hasn’t gotten an extended NHL chance since 2017-18, he had a .925 save percentage with the AHL Springfield Thunderbirds during the regular season and has won five of six playoff starts as well. It stands to reason he could get an NHL shot, so why not one with the Rangers?

Another former Islander, Halak is 37 and played just 17 games last season, so it’s hard to see this making sense if the Rangers want their backup to start 30 times again. But if that is negotiable, Halak could be a serviceable option, as his save percentage has been a hair above .900 in each of the last two seasons.

If the Rangers want to promote from within, Kinkaid and Huska are their options. Kinkaid, who also hits free agency, was higher in the organizational depth chart this past season, though both finished with the same number of starts for the Rangers — one. It would be surprising to see management go in this direction.

Pope Francis shrugged off rumors he’s resigning as the head of the Catholic Church. The 85-year-old told Reuters Saturday he’s...

BRUSSELS — The 30 NATO allies are set to sign off on the accession protocols for Sweden and Finland on...

It seems as though Chris O’Donnell was somewhat tricked into passing on a leading role in “Men In Black.” Director...

Another victim in the senseless Highland Park parade shooting has been identified as a devoted member of a local Jewish...

Two police officers were shot during an Independence Day fireworks show and concert in Philadelphia Monday night, according to local...

The uncle of Robert “Bobby” Crimo III — the person of interest in Highland Park’s 4th of July parade mass...